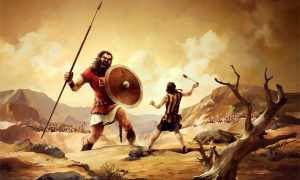 “The act of facing overwhelming odds produces greatness and beauty”

At some stage in our lives we face what we view as powerful opponents: seemingly unsurmountable giants that come in all forms…….a significant diagnosis, a relationship breakdown, an unexpected retrenchment, an oppressive boss, the bully in the school yard, a difficult family situation, the loss of someone we love or, a dream we once held tightly.  Too frequently we can be left feeling powerless, vulnerable and weak.  Yet these Giants are not what we think they are; we misread them.  More importantly we misinterpret ourselves.

For every Goliath there is a Stone
The improbable victory of David over Goliath does not lie in Davids indomitable size, his extensive weaponry or his expensive body armour.  It resides instead in something much more solid.  The renowned stone in this story is representative of Davids innate intelligence, courage and insight. Attention to these powerful inner resources rather than that of external protection allowed David to pursue this battle in an innovative way that guaranteed victory. 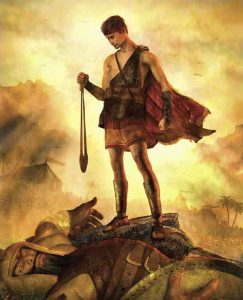 Rewiring our brain for innate intelligence, courage & insight
The brain has an innate capacity to modify and enhance connectivity between different regions on both a functional and structural level.  Known as neuronal plasticity, this process can be used to significantly strengthen positive transformation. Meditation is one of the most effective tools at our disposal that can not only produce new neuronal pathways but inevitably also, diminish those that no longer serve us.

Indulging in emotions that make us feel powerless, vulnerable and weak simply reinforces our fight flight responses, sustaining associated neuronal pathways. Subsequently each time we meet a Goliath we struggle, we give up or, we fall victim to the battle.

With practice we learn to trust this innate intelligence so that in a heart beat as Goliath looks down on us, we are able to bring forth the courage and insight the situation at hand calls for.